Recently, I bought two books Mayada Daughter of Iraq, One woman's survival in Saddam Hussein's torture jail and Princess, The story of the life inside saudi Arabia's royal family by Jean Sasson. This post is about my reading experience with the first book Mayada Daughter of Iraq. Review on second book , Princess is coming up soon ! 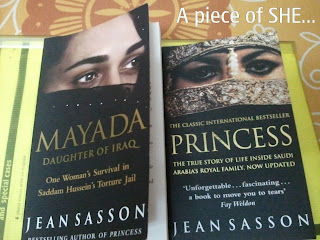 In 1998 , Jean Sasson decided to visit Iraq to see the condition of Iraqi people under the sanctions and Saddam’s regime. Although, she knew well that she won’t get visa for her anti- Saddam views but still she sent a letter to Saddam with a copy of her book “The Rape of Kuwait”. Through her letter, she told Saddam, she had not agreed with his decision to invade Kuwait and that she does not have faith in him as well as his governance. Therefore, she wants to know how Iraqi citizens are living their life under the sanctions and Saddam’s rule. Surprisingly, she received permission to visit Iraq within three weeks.

Mayada and Jean became good friends in that trip. They were in touch with each other and exchanged emails once in a week. One day Mayada suddenly disappeared. Jean found it very disturbing and just when she became restless she received a call from her Mayada informing her that she was in “the can” – Saddam’s secret prison. Few years after the downfall of Saddam’s regime in 2003, Mayada decided to tell her story to the world through Jean and that is how her book Mayada Daughter of Iraq was born.


Mayada is the granddaughter of Sati Al Husri, known as the father of Arab Nationalism. Every Arab people including Saddam loved and respected sati for his honesty and his work for Arab Nationalism. When he died, Mayada was just seven years old. Even her paternal grandfather Jafar Pasha Al- Askari was a respectable man. He served twice as Iraq’s prime minister. Jean’s book Mayada provide all the interesting information about Mayada’s great historical family background. Jean’s book also shed light on Iraq’s history of war and helps readers to understand the modern political crisis in Iraq.

Mayada was a divorcee and mother of two kids Fay and Ali when she met Jean. She worked as a Journalist under Saddam’s rule and twice received awards from him for her writing. She started a printing press of her own after leaving her job as a journalist. Even under Saddam’s regime she never thought of leaving Iraq , the land of her father’s grave. She believed in the fake promises made by the Saddam. All her dreams were shattered when she was arrested by the Saddam’s secret police for no reasons and kept in cell no 52 with other shadow women.

In cell no 52 Mayada met an angel called Samara. Samara’s story and courage would bring tears in your eyes. Samara and all other women of cell no 52 taught me to be a selfless, strong, lovable, and caring woman. God knows what happened to those angels. I googled about them but could not find anything. I read an Interview of Mayada online where she said, she too had no clue about them. Most probably, saddam’s monsters had killed them one by one in the prison. But my heart wants to believe otherwise. Hope they are still alive. I pray to Gods of all religion to look after those women wherever they are and bless them.

Whenever I read Jean’s book I feel sad, depress, scared but at the same time, her book also always remind me to be thankful to God for giving me a normal life. She also encourages me through her writings to do something for those helpless women all around the world. No, Jean is not just like one of that westerner who loves to portray the superiority of America to the world. She just tries to become voice of the Middle East women, which had been suppressed by their own country. Jean's books is the  platform for those women to present their stories to the world.

Mayada Daughter of Iraq is a story of Mayada and other shadow women, captured and tortured by Saddam’s police. While, reading this book I felt like vomitting twice and felt dizzy. So, those who are weak  should prepare themselves mentally before reading it.

“While I cannot walk, I can speak.” With a smile she closed her eyes and whispered, “At the last prison, a poem was etched in the wall. Some poor, suffering, nameless woman died there. Wishing to keep some small part of her alive, I memorized her poem. I say this poem to myself, every day.”
“tell us later,” Dr. Sabah encouraged.
“No. let me tell you now, please.”
Dr. Sabah nodded. “All right. but do not tire yourself.”
Samara’s face and body twitched and she haltingly shared the verses she had so carefully memorized:

“They took me away from my home
They slapped me when I cried out for my children
They imprisoned me
They accused me of crimes I had never committed
They interrogated me with their harsh accusations
They tortured me with their cruel hands
They stubbed out cigarettes on my flesh
They cut out my tongue
They raped me
They cut off my breasts
I wept alone, in pain and in fear
They sentenced me to die
They staked me to the wall
I begged for mercy
They shot me between my eyes
They dumped my body in the shallow grave
They buried me without a shroud
After my death, they discovered I was innocent.”

"As she stood as one with the other shadow women, Mayada told herself that she was living a great moment in her life and that she would never forget a single word from Samara's lips. Every flutter of Samara's movement would be a part of her until the day she died.

She cried quietly and soon all the shadow women were crying together.

Mayada looked around and her words broke the sadness binding them all. "We are comrades-in-tears," she said. Several shadow women chuckled wistfully."

Why should you read this book?

Why you shouldn't read this book?

Do I recommend it?

Yes! However, it affects my health but I cannot stop myself from reading her books. I think I am addicted to her writings.

Click on Jean Sasson to know more about her and her books.