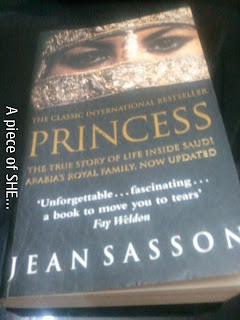 I had finished reading Jean Sasson’s Princess long back but was not getting time to share my reading experience with you all. I got engaged on 19th april to my prince charming aka "the sunshine man". I was giving all my time there. Therefore, missed reading your posts and updating mine as well. My engagement programme went well. We enjoyed a lot with few dear and near ones. I just have a small regret that I had chosen a wrong makeup artist for myself. She completely ruined my make up. I looked like a clown on my special day. At least, my man did not run away even after seeing my red painted face. I am thankful to him and God for that. Anyways, back to Jean’s princess.

My love for Jean’s books is just three books old but it is growing stronger with every book. Princess is first book from princess trilogy. Princess somehow reminds me of Maya Angeleou's "I know why the caged bird sings", especially these lines:

In the Jean's book Princess caged bird is a female , Princess Sultana who is trapped in her royal cage of Saudi Arabia and she sings through the words of Jean to let the world know about the sufferings and pain of the Saudi women. All the time they dream of freedom, equality and love.  Next two books from Princess trilogy are Daughters of Arabia and Desert Royals. The book, which I read, had been updated in 2004 but Saudi Arabia has not changed  much since then. Saudi women still does not enjoy any basic human rights. In her book Princess Jean wrote,

“More than a decade has passed since I first penned the first book about Princess Sultana, Yet the book remain timeless. Why? Because life for women in Saudi Arabia remains much the same as when I lived in the kingdom. While there is much talk about needed change for women’s life in the kingdom, and a few women in Saudi Arabia are trying to break the chains that bind them, I’m sorry to report that in the year 2004, the women of Saudi Arabia are still not free to pursue their dreams.”

After the success of Jean’s  first book “The Rape of Kuwait” during the Gulf war, the whole  world grew curious about the secretive & mysterious Saudi Arabia. Jean had spent four years in Saudi Arabia (1978 – 1982). She worked in Medical Affairs Administration at the King Faisal Specialist Hospital. There she met and become friends with members of the Saudi royal family. She married Peter Sasson and spent nine more years in the Saudi Arabia. She became friends with many middle class Saudi Arabians and people from other Middle East countries who lived in Saudi Arabia. In those nine years she covered all Arab Countries to know them well especially to see the condition of women. These journeys later gave birth to many real life brave heroines through her books.

In 1983, Jean met a bold, beautiful, smart , intelligent and bit different woman called Princess Sultana.  Princess is her story. Jean named her “Princess Sultana” in her book for her safety. Princess Sultana is a member of Saudi Arabia’s royal family. She own four mansions on three continents, private jets and Jewellery worth millions but these material things mean nothing to her.

Princess Sultana’s life is not a fairytale. Two most important things for any individual to be happy is freedom and love which sultana never had in her life. Her father never acknowledges existence of her and her sisters. After the death of princess mother her father re married princess best friend. Her brother was a cruel man too. Later Princess married a man of her father's choice and eventually fell in love with him. After few years her husband turned into a typical Saudi man.

Princess will make up laugh , cry and will force you to think.


Why you must read Princess ?


Why you shouldn't  read Princess ?

Oooops ! Sorry ! I could not find any reason. I am sure you would not regret reading Princess.

Do I recommend It?

Yes ! Trust me you would not regret !

I have a good news and a not so great news. Good news is that I am getting married, on first august 2013. Not so great news is that therefore, I am not getting much time to read and I am spending money more on stuffs like make ups, dresses, shoes than on books. I got some money on my engagement as gift from my family members and may get more on my wedding day ;-) I would buy Jean’s books from that money. I am dying to read all her books.