The Girl On the Train By Paula Hawkins

Author’s Bio –
Paula Hawkins worked as a journalist for 15 years before turning her hand to fiction.
Born and brought up in Zimbabwe, Paula moved to London in 1989 and has lived there ever since. The girl on the train is her best thriller. It is being published around the world and has been optioned for film by DreamWorks. ( Taken from the book).

My reading journey -
Recently, I had finished quite a few numbers of interesting thrillers like Big Little Lies by Liane Moriarty, The Ice Twins By S. K. Tremayne (aka Tom Knox) and now the girl on the train. All of them are selling like hot cakes in the market. I wanted to read the girl on the train for two reasons. First, because of its popularity. Readers are divided into two groups, one those hated the girl on the train and second group belong to those people who believe that it is the best thriller till now. Secondly, some readers are comparing it with Gone Girl which I had found quite interesting therefore, thought of give it a try. 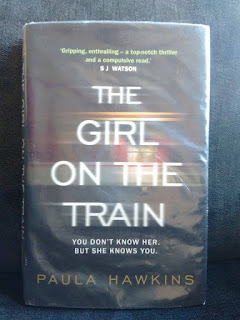 Paula has successfully engaged its reader till the end . Story is presented by the three female characters Rachel, Anna and Megan in the chronological order. The idea of watching the houses from the train is something that we all can relate to and the story starts from here, Rachel observing houses from train and imagining their life.Her imagination is beautifully explained by the author making the readers more curious about the future of the story.  The suspense is lovable. It serves the purpose of a good thriller.

Rachel is a drunkard and ex wife of Tom, who is the husband of Anna now. Rachel has completely messed up her life even before her divorce with Tom. She continues her drinking habits even after her divorce and can’t remember the things she had done while in drunk condition. She commutes daily to London on a train holding lots of secrets to herself and her roommate Cathy. Anna hates Rachel because she believes that Rachel is not leaving them alone. Megan lives just two blocks away from Rachel’s old house occupied by Anna now. One day Megan disappear suddenly and Rachel get herself involved in it willingly with the intention of helping Megan's husband Scott.

This is where lots of people are finding similarity with “Gone Girl” I think. Because Megan suddenly disappears and she hasn’t used her cards or phone. But except disappearance of a wife there is no similarity with the Gone Girl. I found Paula Hawkins storytelling and presentation is also different from Gone Girl. Though I found a major discrepancy in the story which I am afraid If I reveal here then would spoil the fun for those who haven’t read it yet. So without elaborating it much, I would just say that how police could not trace a mobile phone with a sim card inside it? This is really weird to me and killed the fun for me in the end.

If you can swallow that easily then you will enjoy reading this book. Paula has done great job as a debut writer. She writes simply and can very well hold reader’s attention till the end. No harm in reading it once.

Did you like the girl on the train ? Or are you planning to read it ?
Posted by Shainee at 05:21